A Snag in the Ointment 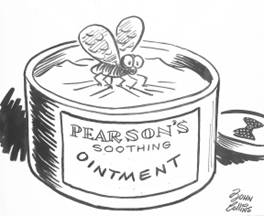 Is there a real estate transaction that you know or knew of before, which hit a snag, and the snag is the culprit that stopped the sale?
What category of snag was it? Was there a lien on the property which could not be taken off? Was it a property which was still in the name of a deceased relative? Was there a dispute among the owners about the property? Was a title company unable to resolve the issue quickly before closing? Was it that the Seller wanted to solve a title problem or dispute over the property before listing it? Was there no right of way access to the property? Was there a zoning issue? An easement issue? Was an inspection report particularly bad?
While not all of these snags may be easily fixed, some may be easier than you may have understood as possible. Some can be fixed with a quiet title action which may be an easier method than what was once expected.
If any such snag is stopping a sale for you, feel free to give us a call to see if a legal remedy is possible. As an attorney I can give new perspectives of solving snags which you may not have thought fixable.
Keep us in mind for any future snags which may appear impossible, so they don’t become a snag of the past which stopped a sale.